3D models in .glTF and .glb format can include as many animations as you want in them. Animations tell the mesh how to move, by specifying a series of keyframes that are laid out over time, the mesh then blends from one pose to the other to simulate continuous movement.

Most 3D model animations are skeletal animations. These animations simplify the complex geometry of the model into a “stick figure”, linking every vertex in the mesh to the closest bone in the skeleton. Modelers adjust the skeleton into different poses, and the mesh stretches and bends to follow these movements.

As an alternative, vertex animations animate a model without the need of a skeleton. These animations specify the position of each vertex in the model directly. Decentraland supports these animations as well.

💡 Tip: Animations are usually better for moving something in place, not for changing the position of an entity. For example, you can set an animation to move a character’s feet in place, but to change the location of the entity it’s best to use the Transform component. See Positioning entities for more details.

Check a 3D model for animations #

Not all glTF files include animations. To see if there are any available, you can do the following:

💡 Tip: In skeletal animations, an animation name is often comprised of its armature name, an underscore and its animation name. For example myArmature_animation1.

If a 3d model includes any animations, the default behavior is that the first of these is always played on a loop.

An Animator component is used to access all the animations of the entity and can be used to explicitly tell the entity to play or stop an animation. Each animation is handled by an AnimationState object. 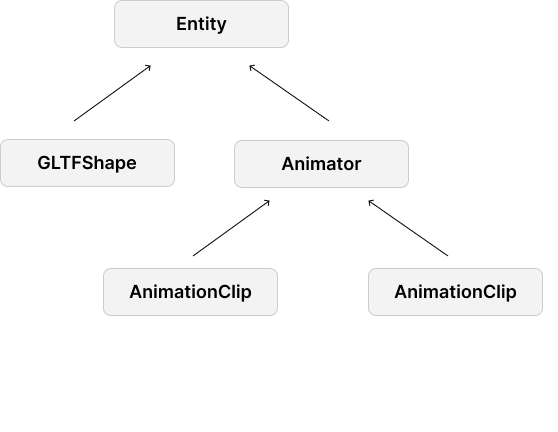 You can also achieve the same with less statements:

You can retrieve an AnimationState object from an Animator component with the getClip() function.

If you don’t have a pointer to refer to the clip object directly, you can fetch a clip from the Animator by name using getClip().

When an AnimationState is created, it starts as paused by default.

The simplest way to play or pause it is to use the play() and pause() methods of the AnimationState.

The play() function on an AnimationState object has one optional parameter:

You can also play an animation from the Animator component of an entity.

When calling the play() function on the Animator component, there are two parameters to set:

By default, animations are played in a loop that keeps repeating the animation forever.

Change this setting by setting the looping property in the AnimationState object.

If looping is set to false, the animation plays just once and then stops.

When an animation finishes playing or is paused, the 3D model remains in the last posture it had.

To stop an animation and set the posture back to the first frame in the animation, use the stop() function of the AnimationState object.

To play an animation from the start, regardless of what frame the animation is currently in, set the reset property on the play() function to true.

📔 Note: Resetting the posture is an abrupt change. If you want to make the model transition smoothly tinto another posture, you can either:

If a 3D model has multiple animations packed into it, a single Animator component can deal with all of them.

In the example above, two animations are handled by separate AnimationState objects, and they are then both assigned to the same Animator component.

📔 Note: If the layer of an animation isn’t specified, it’s assigned to layer 0.

Each bone in an animation can only be affected by one animation at a time, unless these animations have a weight that adds up to a value of 1 or less.

Change the speed at which an animation is played by changing the speed property. The value of the speed is 1 by default.

The weight property allows a single model to carry out multiple animations on different layers at once, calculating a weighted average of all the movements involved in the animation. The value of weight determines how much importance that animation will be given in the average.

By default, weight is equal to 1, it can’t be any higher than 1.

The weight value of all active animations in an entity should add up to 1 at all times. If it adds up to less than 1, the weighted average will be using the default position of the armature for the remaining part of the calculation.

For example, in the code example above, we’re playing the swim animation, that only has a weight of 0.2. This swimming movement will be quite subtle: only 20% of the intensity that the animation defines. The remaining 80% of the calculation takes values from the default posture of the armature.

The weight property can be used in interesting ways, for example the weight property of swim could be set in proportion to how fast the shark is swimming, so you don’t need to create multiple animations for fast and slow swimming.

You could also change the weight value gradually when starting and stopping an animation to give it a more natural transition and to avoid jumps from the default pose to the first pose in the animation.

📔 Note: The added weight value of all animations that are acting on a 3D model’s bone can’t be more than 1. If more than one animation is affecting the same bones at the same time, they need to have their weight set to values that add to less than 1.

Use the setParams() function of the AnimationState object to set multiple parameters at once.

You can configure the following parameters:

You can use a same instance of a GLTFShape component on multiple entities to save resources. If each entity has both its own Animator component and its own AnimationState objects, then they can each be animated independently.

📔 Note: If you define a single AnimationState object instance and add it to multiple Animator components from different entities, all entities using the AnimationState instance will be animated together at the same time.