Decentraland scenes are built around entities, components and systems. This is a common pattern used in the architecture of several game engines, that allows for easy composability and scalability.

Entities are the basic unit for building everything in Decentraland scenes. All visible and invisible 3D objects and audio players in your scene will each be an entity. An entity is nothing more than an id, that can be referenced by components. The entity itself has no properties or methods of its own, it simply serves to group several components together.

Components define the traits of an entity. For example, a Transform component stores the entity’s coordinates, rotation and scale. A MeshRenderer component gives the entity a visible shape (like a cube or a sphere) when rendered in the scene, a Material component gives the entity a color or texture. You can also create custom components to serve your scene’s required data, for example a custom health could store an entity’s remaining health value, and add it to entities that represent non-player enemies in a game.

If you’re familiar with web development, think of entities as the equivalent of Elements in a DOM tree, and of components as attributes of those elements.

📔 Note: In previous versions of the SDK, Entities were objects that were instanced, and could be extended to add functions. As of version 7.0 of the SDK, entities are only an ID. This structure better fits the principles of data oriented programming and can help in the scene’s performance. 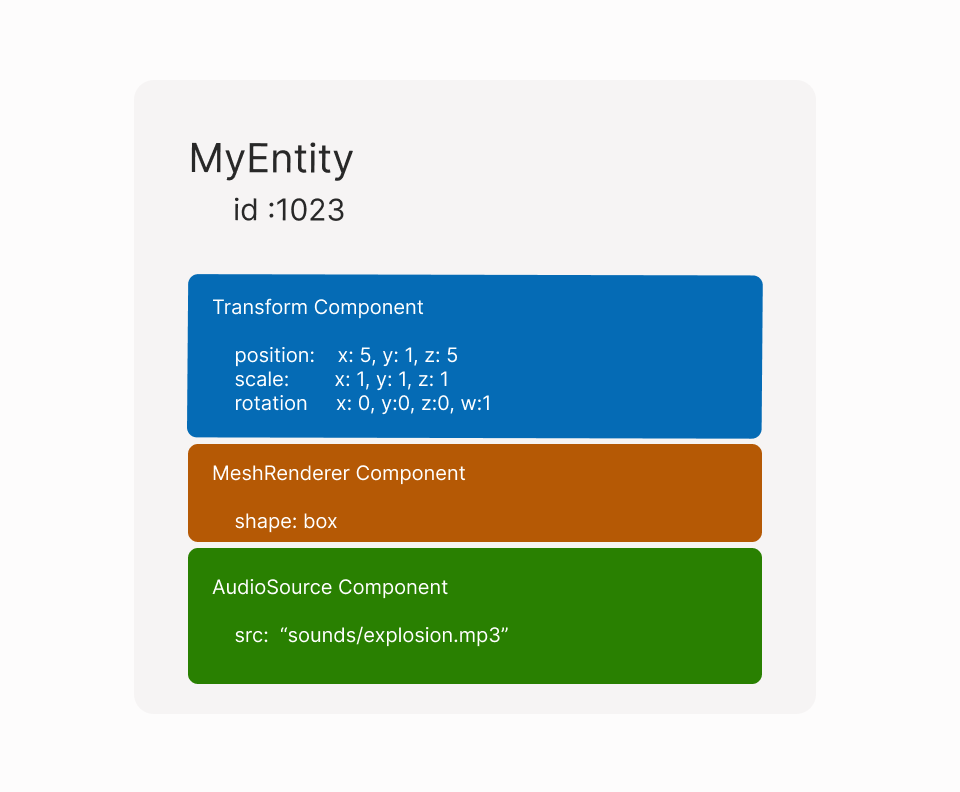 Components like Transform, Material or any of the shape components are closely tied in with the rendering of the scene. If the values in these components change, that alone is enough for the engine to change how the scene is rendered in the next frame.

The engine is the part of the scene that sits in the middle and manages all of the other parts. It determines what entities are rendered and how players interact with them. It also coordinates what functions from systems are executed and when.

Syntax for entities and components #

The example below shows some basic operations for declaring, and configuring basic entities and components.

📔 Note: In previous versions of the SDK, it was necessary to manually add an entity to the engine to start rendering it. As of version 7 of the SDK, entities are implicitly added to the engine as soon as they are assigned a component.

When a component is created, it’s always assigned to a parent entity. The component’s values then affect the entity.

To remove an entity from the engine, use engine.removeEntity()

If a removed entity has any child entities, these change their parent back to the default engine.RootEntity entity, which is positioned at the scene base position, with a scale of 1.

💡 Tip: Instead of removing an entity from the engine, in some cases it might be better to make it invisible, in case you want to be able to load it again without any delay. See Make invisible

Removing entities behind the scenes #

Once the entity’s components are removed, that entity’s id is free to be referenced by new components as a fresh new entity.

An entity can have other entities as children. Thanks to this, we can arrange entities into trees, just like the HTML of a webpage. 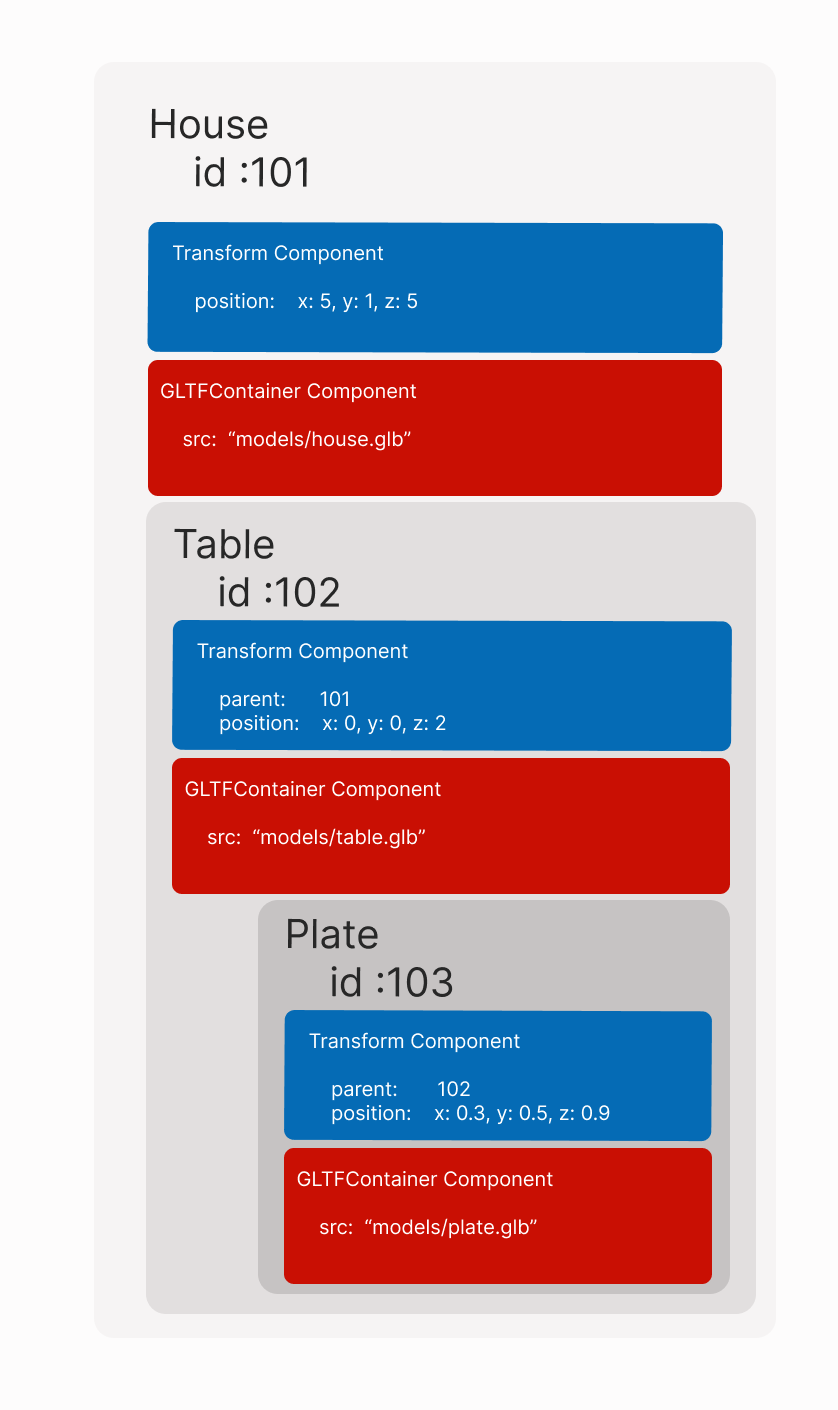 To set an entity as the parent of another, the child entity must have a Transform component. You can then set the parent field with a reference to the parent entity.

Once a parent is assigned, it can be read off the child entity from the parent field on its Transform component.

If a parent entity has a Transform component that affects its position, scale or rotation, its children entities are also affected. Any position or rotation values are added, any scale values are multiplied.

If either the parent or child entity doesn’t have a Transform component, the following default values are used.

Entities with no shape component are invisible in the scene. These can be used as wrappers to handle and position multiple entities as a group.

To separate a child entity from its parent, you can assign the entity’s parent to null.

Get an entity by ID #

Every entity in your scene has a unique number id. You can retrieve a component that refers to a specific entity from the engine based on this ID.

📔 Note: The entity ids between 0 and 511 are reserved by the engine for fixed entities, like the player avatar, the base scene, etc.

For example, if a player’s click or a raycast hits an entity, this will return the id of the hit entity, and you can use the command above to fetch the Transform component of the entity that matches that id. You can also fetch any other component of that entity in the same way.

Add or replace a component #

Each entity can only have one component of a given kind. For example, if you attempt to assign a Transform to an entity that already has one, this will cause an error.

To prevent this error, you can use .createOrReplace instead of .create. This command overwrites any existing components of the same kind if they exists, otherwise it creates a new component just like .create.

📔 Note: Since .createOrReplace runs an additional check before creating the component, it’s always more performant to use .create. If you’re sure that the entity doesn’t already have a component like the one you’re adding, use .create.

You can access components of an entity by using the entity’s .get() or the getMutable() functions.

📔 Note: Only use getMutable() if you’re actually going to make changes to the component’s values. Otherwise, always use get(). This practice follows the principles of data oriented programming, and can significantly help in the scene’s performance.

The example above directly modifies the value of the x scale on the Transform component.

If you’re not entirely sure if the entity does have the component you’re trying to retrieve, use getOrNull() or getMutableOrNull().

📔 Note: Avoid using getOrNull() or getMutableOrNull() when possible, as these functions involve additional checks that and are therefore less efficient than .get() and getMutable().

If the component you’re trying to retrieve doesn’t exist in the entity:

Remove a component from an entity #

To remove a component from an entity, use the entity’s deleteFrom() method of the component type.

If you attempt to remove a component that doesn’t exist in the entity, this action won’t raise any errors.

📔 Note: To remove all the components of an entity at once, see this section

Check for a component #

You can check if an entity owns an instance of a certain component by using the has() function. This function returns true if the component is present, and false if it’s not. This can be very handy for using in conditional logic in your scene.

Certain entity ids are reserved for special entities that exist in every scene. To avoid having to remember their id numbers, they can be accessed via the following aliases:

All entities in the scene are children of the root entity, directly or indirectly.

The engine.PlayerEntity entity represents the player’s avatar. Fetch the player’s Transform component to get the player’s current position and rotation, see user data. You can also modify this Transform to move the player, see move player.