You can set the position, rotation and scale of an entity by using the Transform component. This can be used on any entity, which can also a primitive shape component (cube, sphere, plane, etc) or a 3D model component (GLTFShape). 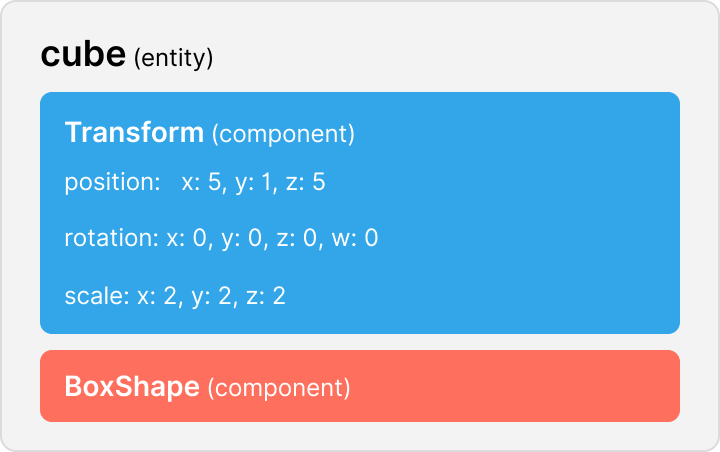 For brevity, you can also create a Transform entity and give it initial values in a single statement, passing it an object that can optionally include position, rotation and scale properties.

To move, rotate or resize an entity in your scene, change the values on this component incrementally, frame by frame. See Move entities for more details and best practices. You can also use the helper functions in the utils library to achieve this more easily.

position is a 3D vector, it sets the position of the entity’s center on all three axes, stored as a Vector3 object.

📔 Note: When setting the value of the position with an object, you can either use a Vector3 object, or any other object with x, y and z fields.

When setting a position, keep the following considerations in mind:

rotation is stored as a quaternion, a system of four numbers, x, y, z and w.

You can also set the rotation field with Euler angles, the more common x, y and z notation with numbers that go from 0 to 360 that most people are familiar with. To use Euler angles, use one of the following notations:

When using a 3D vector to represent Euler angles, x, y and z represent the rotation in that axis, measured in degrees. A full turn requires 360 degrees.

📔 Note: If you set the rotation using Euler angles, the rotation value is still stored internally as a quaternion.

When you retrieve the rotation of an entity, it returns a quaternion by default. To obtain the rotation expressed as in Euler angles, get the .eulerAngles field:

Another option is to perform a rotate operation on an existing transform, which adds to its current rotation. The rotate operation takes a vector that indicates a direction, and a number of degrees to rotate. In the following example, we’re tilting an entity 15 degrees along the X axis, which adds to whatever rotation it initially had:

The rotate operation is useful when dealing with an entity that’s rotated in multiple axis, for example both X and Y. The following example sets an original rotation in the Y axis, and then rotates the Transform along the X axis:

Add a Billboard component to an entity so that it always rotates to face the player.

Billboards were a common technique used in 3D games of the 90s, where most entities were 2D planes that always faced the player. The same idea can also be used to rotate a 3D model.

You can choose which axis to rotate as a billboard. For example, if the Billboard of a cube only rotates in the Y axis, it will follow the player when moving at ground level, but the player will be able to look at it from above or from below.

The three optional parameters when creating a Billboard component are booleans that refer to the x, y, and z axis. They are all true by default.

Tip: To rotate an entity so that it follows the player around while at ground level, give it Y axis rotation.

Billboards are also very handy to add to text entities, since it makes them always legible.

The rotation value of the entity’s Transform component doesn’t change as the billboard follows players around.

📔 Note: If there are multiple players present at the same time, each will see the entities with billboard mode facing them.

Face a set of coordinates #

You can use lookAt() on the Transform component to orient an entity fo face a specific point in space by simply passing it that point’s coordinates. This is a way to avoid dealing with the math for calculating the necessary angles.

This field requires a Vector3 object as a value, or any object with x, y and z attributes. This vector indicates the coordinates of the position of the point in the scene to look at.

The lookAt() function has a second optional argument that sets the global direction for up to use as reference. For most cases, you won’t need to set this field.

scale is also a 3D vector, stored as a Vector3 object, including the scale factor on the x, y and z axis. The shape of the entity scaled accordingly, whether it’s a primitive or a 3D model.

You can either use the set() operation to provide a value for each of the three axis, or use setAll() to provide a single number and maintain the entity’s proportions as you scale it.

The default scale is 1, so assign a value larger to 1 to stretch an entity or smaller than 1 to shrink it.

You can either set each dimension individually, or use the set operation to set all dimensions.

When setting the value of the scale with an object, you can either use a Vector3 object, or any other object with x, y and z fields.

When an entity is nested inside another, the child entities inherit components from the parents. This means that if a parent entity is positioned, scaled or rotated, its children are also affected. The position, rotation and scale values of children entities don’t override those of the parents, instead these are compounded.

If a parent entity is scaled, all position values of its children are also scaled.

You can use an invisible entity with no shape component to wrap a set of other entities. This entity won’t be visible in the rendered scene, but can be used to group its children and apply a transform to all of them.

📔 Note: Child entities should not be explicitly added to the engine, as they are already added via their parent entity.

Attach an entity to an avatar #

To fix an entity’s position to an avatar, add an AttachToAvatar component to the entity.

When creating an AttachToAvatar component, you must pass an object with the following data:

The following anchor points are available on the player:

📔 Note: Future SDK versions will include alternative anchor points on the avatar that will accompany the avatar animations.

Entity rendering is locally determined on each instance of the scene. Attaching an entity on one player doesn’t make it visible to everyone seeing that player.

📔 Note: Entities attached to an avatar must stay within scene bounds to be rendered. If a player walks out of your scene, any attached entities stop being rendered until the player walks back in. Smart wearables don’t have this limitation.

To attach an entity to an avatar, you must provide the user’s ID in the field avatarId. There are various ways to obtain this data.

📔 Note: For those players connected with an Ethereum wallet, their userId is the same as their Ethereum address.

See other ways to fetch other user’s IDs in Get Player Data.

Note: This method for attaching entities to the player is deprecated. Use the AttachToAvatar component instead.

Set an entity as a child of the Attachable.FIRST_PERSON_CAMERA object to fix the entity to the player and follow the player’s movements.

If the attached entity has a Transform component, it will be positioned relative to the player’s position, and keep that relative position as the player moves or rotates.

To fix an entity’s rotation only in the x axis to the player, set an entity as a child of the Attachable.AVATAR object. The entity will then rotate with the player when looking around at ground level, but it won’t accompany the player’s rotation when looking up or down.

Both Attachable.FIRST_PERSON_CAMERA and Attachable.AVATAR behave similarly, but have subtle differences:

For example, in a multiplayer scene where players can pick up boxes and move them around, the recommended approach is to make boxes that are being carried by other players invisible. So that only players that are currently carrying a box see them attached to themselves.

All entities in your scene must fit within the scene boundaries, as what’s outside those boundaries is parcels of land that are owned by other players.

The position of entities in your scene is constantly being checked as they move, if an entity leaves the scene and then returns it will be removed and then rendered normally again.

A grid on the scene’s ground shows the limits of the scene, which by default rage from 0 to 16 on the x and z axis, and up to 20 on the y axis. You’re free to place entities underground, below 0 on the y axis.

💡 Tip: If your scene needs more parcels, you can add them in the project’s scene.json file. See Scene metadata for instructions. Once added, you should see the grid extend to cover the additional parcels. 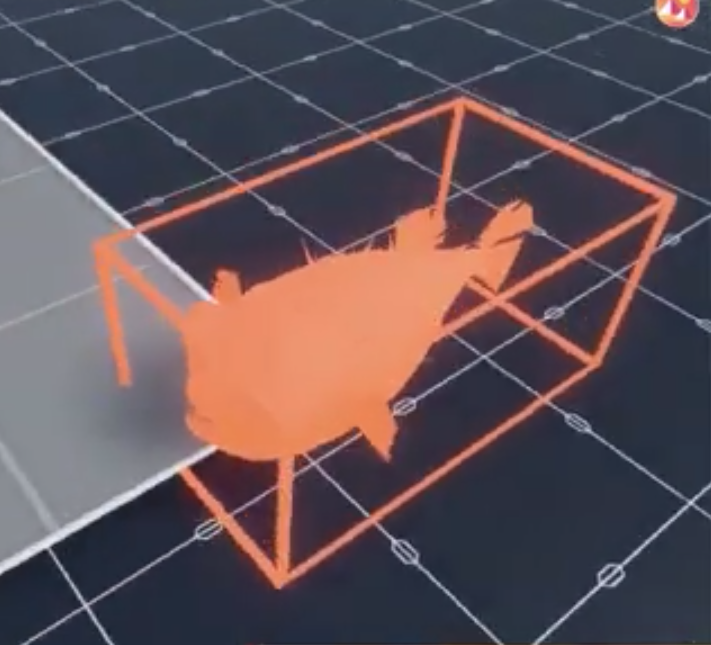 If an entity’s cube extends beyond the shape of its meshes, you might need to edit the 3D model in an external editor to reduce these margins, or to bake the rotation and scale of the meshes in the model.