Each component group keeps track of a list of entities that have all the required components. 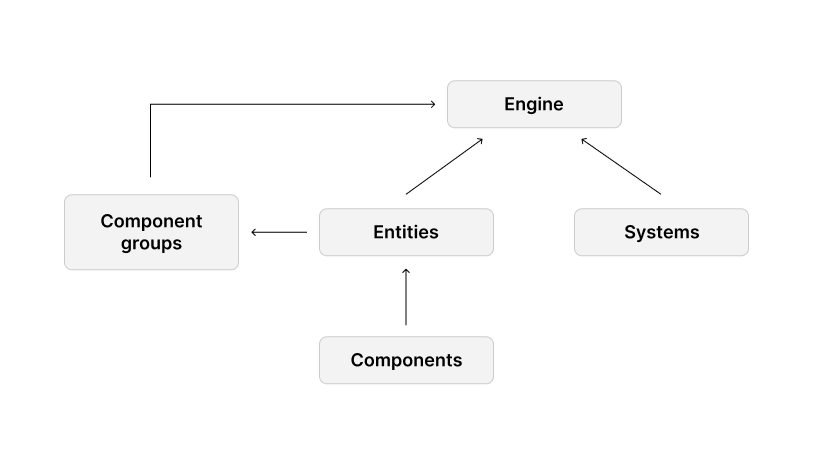 The engine automatically updates this list every time that:

After the group is created, you don’t need to add or remove entities manually from it, the engine takes care of that.

Systems typically iterate over the entities in these groups in their update method, performing the same operations on each. Having a predefined group of valid entities is a great way to save resources, specially for functions that run on every frame like update(). If on every frame your system would have to iterate over every single entity in the scene looking for the ones it needs, that would be very time consuming.

You can access the entities in a component group in the following way: if the group name is myGroup, calling myGroup.entities returns an array containing all the entities in it.

📔 Note: Keep in mind that component groups take up space in the local memory of the player’s machine. Usually, the benefit in speed you get from having a group is a tradeoff that is well worth it. However, for cases where you’d have a large group that you don’t access all that often, it might be better to not have one.

When creating a component group, specify what components need to be present in every entity that’s added to the group. You can list as many components as you want, the component group will only accept entities that have all of the listed components.

Use component groups in a system #

In the example above, PhysicsSystem iterates over the entities in myGroup as part of the update() function, that is executed on every frame of the game loop.

📔 Note: The engine.getComponentGroup() is an expensive function to process, it should never be used inside the update of a system, as that would create a new group on every frame. When regularly checking the entities in a group, refer to an already created group, as in the example above. Once created, component groups are updated as entities and components are added and removed from the engine, so there’s no need to redeclare or update these groups.

Dealing with the entities #

The entities array of a component group contains elements of type IEntity, which is identical to Entity, but not recogized by Typescript as the same type. If a function expects an input of type Entity, you can simply force the argument’s type with as Entity.

You can access the full list of entities that have been added to the engine, regardless of what components they have, through engine.entities.

Change a component group while iterating #

Component groups are mutable. You shouldn’t modify the component group while you’re iterating over it, because that could have unwanted consequences.

For example, if you iterate over a component group to remove each entity from the engine, the act of removing an entity displaces the other entities in the array, which can lead to some entities being skipped.

To overcome this problem, use the following code to remove all entities from the engine: