A scene is a Decentraland project that is spatially delimited, and is mapped to one or several LAND parcels. If a scene is deployed to the Decentraland map, players can experience it by visiting the scene’s coordinates.

See Files in a scene for a list of what files are used in a scene project.

All scenes have a scene.json file where you can set metadata for the scene. Some fields in this file are predefined with information that’s necessary to load your scene. You’re also free to add any fields that you wish.

Set parcels via the command line #

💡 Tip: The South-West parcel is always the one with the lowest numbers on both the X and Y coordinates.

📔 Note: The base parcel must be one of the parcels in the scene.

📔 Note: The base parcel must be one of the parcels in the scene.

It’s very important to give your scene a title, a description and a thumbnail image to attract players to your scene and so they know what to expect.

Players will see these displayed on a modal when they select the parcels of your scene on the map. They will also see these in a confirmation screen when being teleported there by another scene. Setting up compelling data here can significantly help drive traffic to your scene. 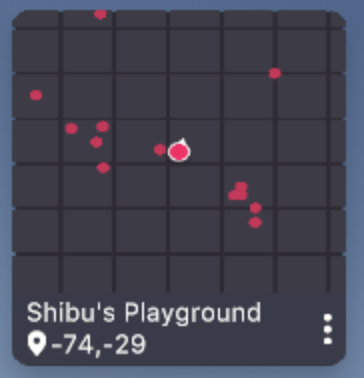 📔 Note: If you host an image elsewhere, make sure this is in a site that has permissive CORS policies for displaying content on other sites.

📔 Note: All spawn points must be within the parcels that make up the scene. You can’t spawn a player outside the space of these parcels.

📔 Note: In future releases, when a player enters a scene that has items listed in the requiredPermissions property, the scene will prompt the player to grant these permissions. The player will be able to decline these permissions for that scene.

You may need a scene’s code to access the fields from the scene metadata, like the parcels that the scene is deployed to, or the spawn point positions. This is especially useful for scenes that are meant to be replicated, or for code that is meant to be reused in other scenes. It’s also very useful for libraries, where the library might for example need to know where the scene limits are.

📔 Note: getParcel() needs to be run as an async function, since the response may delay a fraction of a second or more in returning data.