Decentraland accepts events from pointer clicks, a primary button and a secondary button.

Clicks can be done either with a mouse, a touch screen, a VR controller or some other device, these all generate the same type of event.

The primary and secondary buttons map respectively to the E and F key on a keyboard.

Note: Entities that don’t have a shape component, or that have their shape’s visible field set to false don’t respond to pointer events.

The best way to handle pointer and button down events is to add an OnPointerDown component to an entity.

The component requires that you pass it a function as a main argument. This function declares what to do in the event of a button down event while the player points at the entity.

Tip: To keep your code easier to read, the function in the OnPointerDown can consist of just a call to a separate function that contains all of the logic.

The OnPointerDown component has a second optional parameter, this parameter is an object that can include multiple properties about the event. These properties are explained in greater detail in the next few sub-sections.

Add an OnPointerUp component to track when a player releases the mouse button, the primary or the secondary button while pointing at the entity.

Like the OnPointerDown, the OnPointerUp component requires a callback function that declares what to do in the event of a button up event while pointing at the entity.

This component also takes a second argument that supports the same additional fields as teh OnPointerDown component.

The OnPointerDown and OnPointerUp components can respond to three different buttons: POINTER, PRIMARY, or SECONDARY. On a PC, these map to the left mouse click, E and F.

You can configure the components by setting the button field in the second argument of the component initializer. The following values are supported:

ActionButton.ANY detects events from all three buttons. If none of them is specified, then ANY is used.

When a player hovers the cursor over an item with an OnPointerDown or OnPointerUp component, the cursor changes shape to hint to the player that the entity is interactive.

You can also display a toast message in the UI that lets the player know what happens when interacting with the entity.

In the example above, the second argument of the OnPointerDown component has an object with the following arguments:

TIP: The hoverText string should describe the action that happens when interacting. For example Open, Activate, Grab, Select. These strings should be as short as possible, to avoid stealing too much focus from the player.

The hoverText of an OnPointerUp component is only displayed while the player is already holding down the corresponding key and pointing at the entity.

By default, entities are only clickable when the player is within a close range of the entity, at a maximum distance of 10 meters. You can optionally configure the maximum distance through the distance parameter of the OnPointerDown and OnPointerUp components.

The example above sets the maximum distance to 8 meters.

The pointer down event and the pointer up event objects are implicitly passed as parameters of the functions in the OnPointerDown and OnPointerUp components, respectively. This event object contains various properties that might be useful for the function. See Properties of button events for more details.

The events from OnPointerDown and OnPointerUp components, as well as all the global button event objects, contain the following parameters:

Differentiate meshes inside a model

Often, .glTF 3D models are made up of multiple meshes, that each have an individual internal name. All button events events include the information of what specific mesh was clicked, so you can use this information to trigger different click behaviors in each case.

To see how the meshes inside the model are named, you must open the 3D model with an editing tool, like Blender for example. 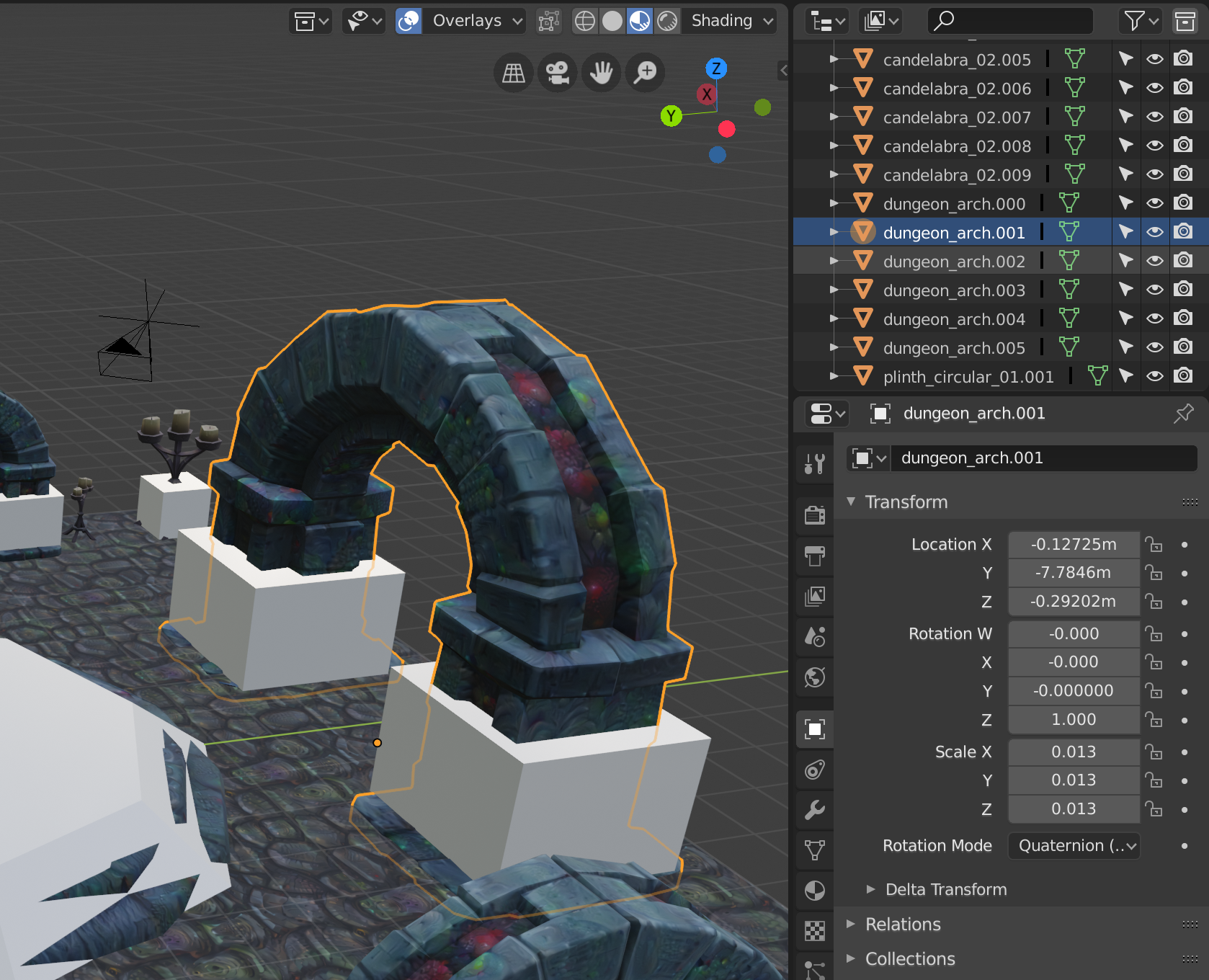 Tip: You can also learn the name of the clicked mesh by logging it and reading it off console.

You access the meshName property as part of the hit object, that’s returned by the click event.

In the example below we have a house model that includes a mesh named firePlace. We want to turn on the fireplace only when its corresponding mesh is clicked.

The BUTTON_DOWN and BUTTON_UP events are fired whenever the player presses or releases an input controller button.

Tip: On a computer, that refers to the left mouse button (or trackpad), the E, and the F keys.

These events are triggered every time that the buttons are pressed or released, regardless of where the player’s pointer is pointing at, as long as the player is standing inside the scene’s boundaries.

Instance an Input object and use its subscribe() method to initiate a listener that’s subscribed to one of the button events. Whenever the event is caught, it executes a provided function.

The example above logs messages and the contents of the event object every time the pointer button is pushed down or released.

The event objects of both the BUTTON_DOWN and the BUTTON_UP contain various useful properties. See Properties of button events for more details.

Note: This code only needs to be executed once, the subscribe() method keeps polling for the event. Don’t add this into a system’s update() function, as that would register a new listener on every frame.

Tip: See Colliders for details on how to add collider meshes to a 3D model.

The example above checks if any entities were hit, and if so it fetches the entity and applies a material component to it.

The event data returns a string for the entityId. If you want to reference the actual entity by that ID to affect it in some way, use engine.entities[e.hit.entityId].

Note: We recommend that when possible you use the approach of adding an OnPointerDown component to each entity you want to make interactive, instead of using a global button event. The scene’s code isn’t able to hint to a player that an entity is interactive when hovering on it unless the entity has an OnPointerDown, OnPointerUp, or OnClick component.

Button events cast rays that only interact with the first entity on their path, as long as the entity is closer than its distance limit.

For an entity to be intercepted by the ray of a button event, the entity’s shape must either have a collider mesh, or the entity must have a component related to button events (OnPointerDown, OnPointerUp or OnClick).

As an alternative to OnPointerDown, you can use the OnClick component. This component only tracks button events from the POINTER, not from the primary or secondary buttons.

You declare what to do in the event of a click by writing a function in the OnClick component.

The OnClick component passes less event information than the OnPointerDown component, it lacks the click distance or the mesh name, for example.

Note: Entities that don’t have a shape component, or that have their shape’s visible field set to false can’t be clicked.

You can check for the button’s current state (up or down) using the Input object.

If the pointer button is currently being held down, the statement above returns the value true, otherwise it returns false.

You can check for the states of the PRIMARY and SECONDARY buttons in the same way, providing ActionButton.PRIMARY or ActionButton.SECONDARY as arguments for the isButtonPressed() function.

You can implement this in a system’s update() function to check the button state regularly.